Should I accept a particular gambit or better reject it? This question occupies every tournament player. I will examine it here on both, a general and a concrete level. General considerations have the benefit of including all readers in the discussion and to make everyone profit from it. On the other hand, by means of using a concrete example, I avoid that the topic becomes too abstract or dry.

My object of research is the Morra Gambit. It is the Gambit that affects the largest number of readers, simply because the Sicilian Opening appears in more than 20% of all games and is hence the most popular opening.

What do we notice when we look at the following notation? 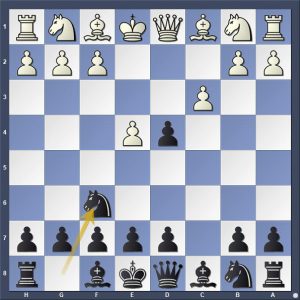 Instead of taking the material lead, the great Anand chickened out and rejected the Morra Gambit. How can this be explained?

Reason 1: Risk Management
Risk Management is part of the so-called metagame. The central topic of the metagame is the maximization of success, measured in points, and not the scientific correctness of a specific move. A typical situation in which risk management plays a role is when one player enjoys the clearly better position and now has the choice a) to either make an ingenious but rather complicated sacrifice, which could end the game quickly and in style, or b) to make small improvements or maintain the status quo. What is the generally better alternative? Well, assuming you do not feel like hunting for immortality, quite clearly option b). The big advantage you already have in your pocket is just too much at stake. Randomizing the result in such a situation would be unwise.

Now, if Anand is sitting at the board before move 1 against a mortal IM, it’s basically the same as if someone is having a clear positional advantage against an opponent of equal strength. Understandably, he didn’t want to take any risk. It becomes even more understandable, when you look at the following reasons.

Reason 2: Opponent’s Profile
The consideration of the opponent’s profile is also part of the metagame. Basically, one should try to avoid positions in which the strengths of the opponent comes to fruition. It is even worth considering to directly target his weaknesses (blog post 28 is dedicated to this topic). Gambit players are usually attacking players with good tactical skills. For this reason, it cannot be a big mistake to avoid rough waters.

Reason 3: Expertise
In the majority of games there is an information or knowledge asymmetry between the players. This has structural reasons, among others. If I maintain a 1.e4-repertoire, which consists of main lines for the biggest part, I have to know dozens of variations, at least in a superficial way. The black player, on the other hand, may simply be specialized in just one opening within the entire 1.e4-universe. In most 1.e4-games Black enjoys a home advantage for this reason. Of course, White, on the other hand, is in possession of “the service”, and that can sometimes be pretty hard ……

As insiders know, Marc Esserman is not just any Morra player, but rather the Morra expert par excellence. His 2012 book “Mayhem in the Morra!” (Quality Chess) is considered the “Morra Bible” among the adepts. He is a fanciful attacking player and already has several GM scalps hanging on his Morra belt. Through him, quite a fashion wave has been triggered, with the result that many a club players is now harassed by the “Morra plague”. Well, a plague for one, a blessing for the other, as you will find out as we go along.

The next post will deal with reasons 4 and 5: tournament economy and learn economy.