Reason 4: Tournament Economy
We now understand some of the potential causes of Anand’s behavior, but probably not all. I strongly believe he had accepted the gambit if he only would have possessed fresh knowledge. His problem, however, was that in his league the Morra Gambit never actually appears on the board. Probably, he had dealt with it a long time ago, but this knowledge was faint and most likely out of date. He now had the choice of either wasting his energy before the game by analyzing the Morra from scratch or to follow a pragmatic approach by just scanning his already existing analysis of the c3 Sicilian. When having an inbuilt advantage over your opponent, just playing a normal game of chess is not the worst of ideas, after all.  These are common metagame considerations of professional players.

Reason 5: Learning Economy
Anand’s variation can also be used as a good example for long-term economy. Again it’s about the metagame. The subject of the economics of learning is the maximization of your performance throughout the entirety of your chess career by using the time available for chess as efficiently as possible. If you answer 2.c3 with 2..Nf6, you do not really need to worry about the Morra Gambit. This fact could also play a role in favor of 2..Nf6 on the question “What do I do against 2.c3?”. There are several examples of the topic “Hitting two birds with one stone”. Let me only mention the decision to play the Bogo-Indian after 1.d4 Nf6 2.c4 e6 3.Nf3. In contrast to the Queensindian, it has the advantage of simultaneously covering the Catalan, because you also responded to 3.g3 with 3..Bb4 +.

Now, 3..Nf6 is not the only way to reject the Morra Gambit. There is also the move 3..d3, and it also has something to do with economic behavior. 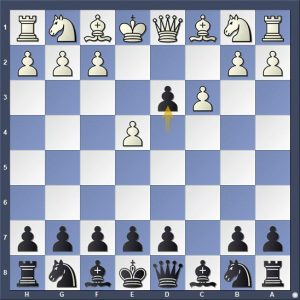 After 4.Bxd3 d6 4.c4 Black has the option to continue with either g6 or e6. The former leads to a Maroczy structure and the latter to the Hedgehog. As is well-known, the Hedgehog is not an opening, but a middle game structure. He who masters the Hedgehog, can access its services in a multitude of openings, even though in most cases some cooperation is needed from the opponent. As the Hedgehog is a scheme, Black normally will find his way around without any concrete knowledge of theory.

When I met the Morra Gambit in a 20-minute rapid game in 2002, I decided after a short while of thinking to simply escape into the Hedgehog. My motives corresponded with the above mentioned metagame principles: I was clearly superior to my opponent, so I just wanted to play chess rather than engage in a complicated theoretical discussion. Also, I had no sharpened weapon at the time against the Morra, as it only rarely hit the board on my level. In addition, the game format gave me no opportunity to ponder about intricate opening problems. I will present the game in the next blog post, as it contains a very special Hedgehog motive and also serves as a good example for the exploitation of weak squares in a more general sense.

Although 3..d3 is certainly playable, it is not on the same level as 3..Nf6. Objectively, White should be able to achieve a slight advantage here. A third possibility, and probably unknown to many, is the move 3..e5. 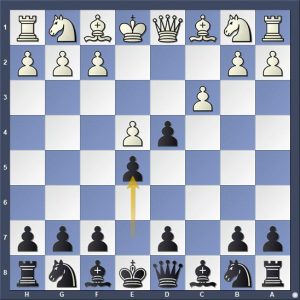 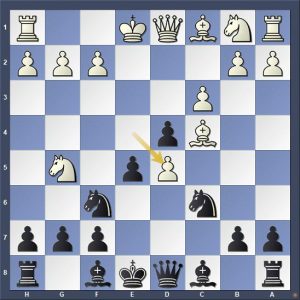 and now either 7..Nxd5 or 7..Na5, similar to the Prussian Game. Esserman provides an analysis, but with today’s engines interested chess friends can easily arrive at a final verdict, as the position is extremely concrete in nature.

For the sake of completeness it should be mentioned that the rejection of the Morra Gambit with 2..e6 ?! is questionable because of 3.d5 + = and that one is well advised to refrain from 2..cxd4 3.c3 Da5? because of 4.Bd2! with a clear advantage for White (Esserman).