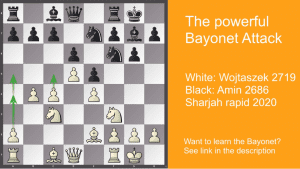 On the occasion of the release of my Chessable course about the Bayonet Attack, I present you a very instructive game between two world class players, where many of White’s ideas come to fruition. Despite being a rapid game, the quality of play is pretty high. If you want to settle the “King’s Indian question” once and for all, the Bayonet Attack might be for you.